My students have created and continue to modify a game called PEOOTLT. Pronounced “pee-olt”, it stands for Push Each Other Off The Leaf Things.

There are these green, leaf shaped platforms that circle an oak tree and are just far enough from one another to encourage leaping from one to the other. On some of them are small walls that jut up from the middle. Some are pointy, some oddly shaped.

I’m not too sure of all the rules of the game but it involves making it across all of the platforms without getting pushed off by another participant. It’s evolved to have specific entry points and teleportation.

Since before the game’s inception, kids have gotten hurt just leaping across and landing poorly. At least twice a day someone hurts their self. The inclusion of pushing one another has not lowered the injury rate but it also hasn’t raised it. 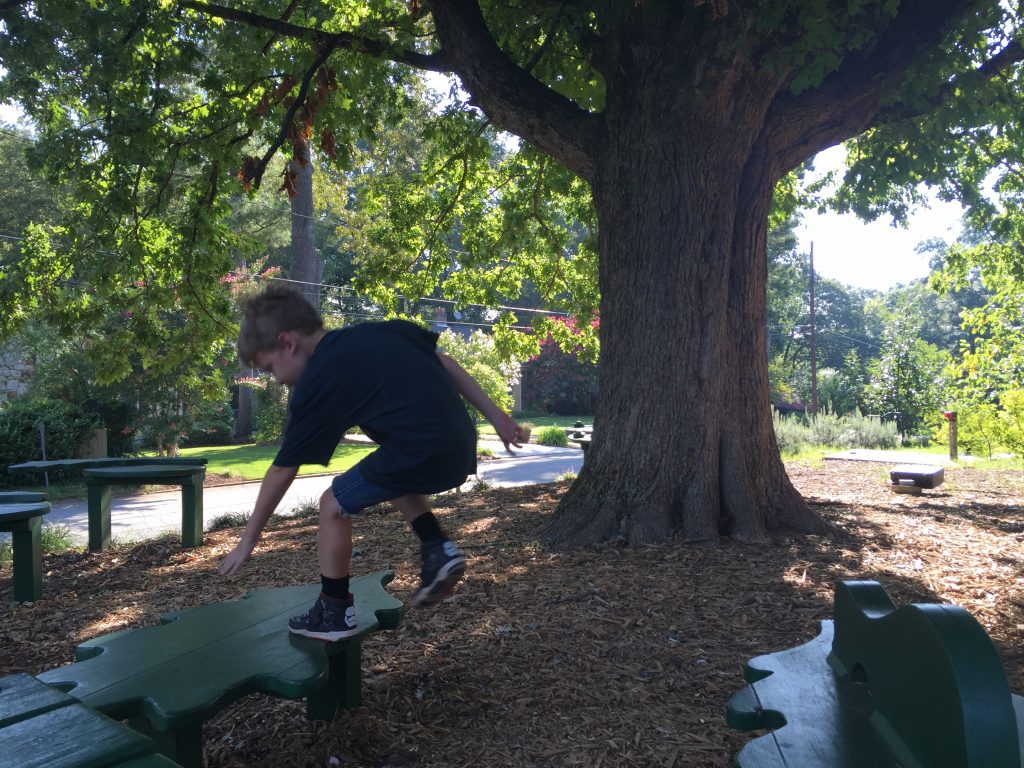 After a particularly harmful day, it was brought up during Change-Up that PEOOTLT is dangerous and that it shouldn’t be played anymore. There was huge disagreement amongst the kids who enjoyed playing and one stated how the risk you take in playing is that you might fall or bump your knee. The student continued, stating that those who don’t want to get hurt and don’t want to play shouldn’t play but shouldn’t block those who do from being able to.

The facilitators have not participated much in the conversation with the students outside of the facilitating. It’s interesting to see them have this conversation about consenting to a game that they risk injuring themselves. Though we want to, we haven’t banned the game nor the simple leaping across. That seems like the easy way out. We’re responsible for their health and safety, sure, but they’re kids and you simply can’t eliminate the potential and actuality for injury and harm.

Someone could argue that as adults we should do the best we can to decrease the risks and certainly not allow for increase. I would argue for the student’s ability to rationalize and consent to activities that may be dangerous. I would argue for students being responsible for their bodies and having the faculty to decide for themselves whether or not it’s wise to engage in certain activities. We could argue all day.

In the end, I know PEOOTLT is dangerous and the kids know it too. Because they’re aware they’re also held responsible. To me, the lesson of autonomy and self-responsibility is far more important & valuable than what lesson might be taught when you require kids to obey a safety mandate because fear of increased risks.